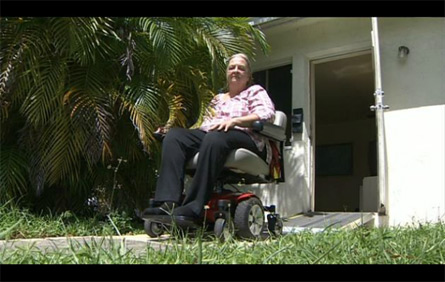 Imagine being a prisoner in your own home. Stuck in a wheelchair, unable to go outside because you don’t have a wheelchair ramp. Even worse, you can’t get one. Why it’s one roadblock after another and it’s why one woman called Help me Howard with Patrick Fraser.WSVN — Some people lead charmed lives. Some people don’t.Linda Joyner: “I had polio at 4 years old.”As a child Linda was molested by a distant relative. At 18, she was kidnapped and terribly abused.

Linda Joyner: “And while he was going into his rage I ran to the car.”

Linda escaped the kidnapper but today in her retirement years, she is a prisoner in her own apartment.

Linda cannot get out of her apartment without a wheelchair ramp. 18 months ago, she bought this one but it’s too heavy for her to lift, and dangerous to use.

Linda Joyner: “If you lean back and you are on too big of an angle the gravity level isn’t there and you will flip back.”

For a while Linda paid different people $5 to put the ramp down to let her get to the store. But finding someone was hard.

Then last year, Linda asked us to help her. We made some calls and were told that a Broward agency was donating a permanent ramp. A contractor had volunteered to install it. Everything was taken care of. We moved on, but the ramp never arrived.

Linda Joyner: “I was promised February then that backed out. June two to three weeks, just got a letter it will be this month.”

As the hurdles were being overcome, her landlord came in with another roadblock.

Linda has kept a blog of the broken promises, the obstacles, page after page, being promised the ramp is coming. Then why the ramp cannot be installed.

Linda Joyner: “I sit in the doorway sometimes just to get a little fresh air. I am so desperate. I am so sick.”

After waiting for over a year, Linda called us again asking us to get involved. She had called us after she was taken to the hospital with chest pains.

Linda Joyner: “Stress, stress from the ramp. Strictly the ramp.”

Well Howard, we want to help but legally can a person confined to a wheelchair be forced to assume liability, be forced to stay locked in her apartment. Basically be forced to be a prisoner?

Howard Finkelstein: “No. A tenant is not required to sign a release and is not responsible for any liability if the ramp is installed according to code. The landlord has to allow what the law calls a reasonable modification and this ramp is exactly that. But the landlord does not have to pay for it. That’s the tenants problem.”

We went to work in August try to get the ramp for Linda. Randall Berg from the Florida Justice Institute cleared the legal hurdles. The Center for Independent Living paid $2,200 for the ramp that the City of Hallandale Beach required. But the contractor who had promised to install it for free backed out.

Then Advanced Mobility stepped in and agreed to construct it, but Hallandale Beach refused to issue the permit because it did not meet federal ADA requirements. The Center for Independent Living then had to find the money to pay for a landing for the ramp to meet the requirements. Advanced Mobility reapplied for a permit. After 18 months, finally as Linda watched from her window. the installation began.

Linda Joyner: “Oh, my God. I am so relieved. I can’t begin to tell you this is like a miracle.”

Bob Davis’s group spent months of work and thousands of dollars to get it done..

Bob Davis: “But it’s worthwhile this is what we are all about providing independence to people with disabilities.”

But another hurdle the City of Hallandale Beach did not approve the ramp saying according to state and federal guidelines, the ramp was too steep and the platform needed to be raised up. Linda can continue to use the ramp while it’s done. Meaning she is free to go in and out whenever she wants.

Linda Joyner: “Thank you Help me Howard. I mean my God, if anybody could do miracles it’s you guys. Without Help me Howard I would still be inside.”

Patrick Fraser: “I don’t think I have ever had a case where so many roadblocks were popping up. But we will keep an eye on this to make sure Linda gets help getting her ramp approved. The landlord told me he was worried about being responsible if someone tripped over the ramp or a hurricane blew it thru a window. Howard says if the ramp is installed properly, no-one is liable.”